You don't eat pork, do you? 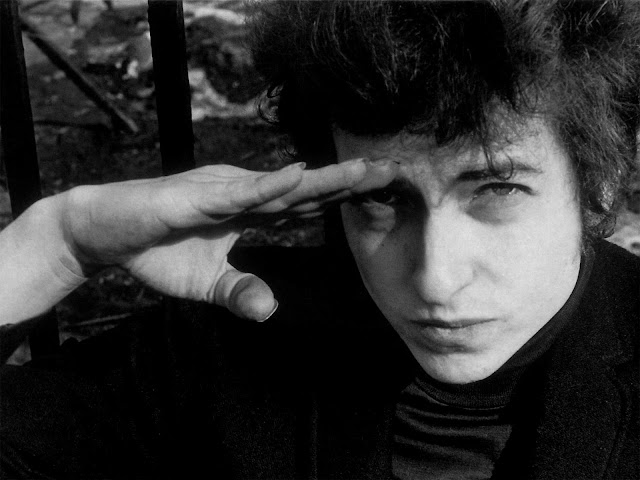 Of course Jewish people do change their names, especially when they go into American show business; another Zimmermann, Ethel Agnes, changed hers to Ethel Merman. In the very full account of the name change he gives in Chronicles, Dylan does not even mention motivation. How far has anti-Semitism been a consideration for him? Michael Jones, in his essay in The Political Art of Bob Dylan, hears it in the infamous cry of "Judas!" at the concert in Manchester in 1966. But in an English culture almost unimaginably more Christian than it is now, "Judas" meant "traitor" much more readily than it implied "Jew".

In Chronicles Dylan is clearly still resentful about the fact that high school bands he formed were stolen from him by people with local family connections, who could organize payment. Is anti-Semitism implicit in this story, since the "family connections" of someone called Zimmerman presumably did not extend far in Hibbing, Minnesota? Anti-Semitism is overt when, also in Chronicles, Dylan recalls sitting after a meal in a circle of singersongwriters in Johnny Cash's house. They pass the guitar to one another and each does a party piece, receiving compliments afterwards.

It sounds attractively sociable, if a little competitive - until Dylan sings "Lay, Lady, Lay" and June Carter Cash's cousin Joe asks, as his only comment, "You don't eat pork, do you?". (Kris Kristofferson, Dylan says, "almost swallowed his fork".) Dylan, calling Joe Carter "sir", admits that he doesn't eat pork and quotes a remark about eating pork that he'd heard Malcolm X make in a radio broadcast several years earlier. "There was an awkward momentary silence", Dylan says, "that you could have cut with one of the knives off the dinner table."

This is a fascinating, ramifying moment. Dylan has sung a country song he has written that appears on an album (Nashville Skyline, 1969) on which he sings a duet with Johnny Cash, the king of country music and host of this entertainment; and this was an album met with horror by some of Dylan's earliest fans because country music is the music of rednecks. Joe Carter, of the well-known country music act the Carter Family into which Cash had married, behaves exactly according to the conventional idea of a redneck, with extreme discourtesy to his host and with something even worse to Dylan himself; he clearly believes that this is his music and that the Jewish Dylan is an appropriating outsider, without rights: he is not entitled to be here. Dylan responds with a surely barbed imitation of country manners - that apparently deferential, in fact scathing "sir" - and with a reference to the leader of the Nation of Islam, who himself did not eat pork but who was also tainted with anti-Semitism. On Nashville Skyline, though, Dylan makes great country music and makes country music new, so it is most definitely his music; and so are blues music and folk music and rock music and gospel music and the other musics Dylan has adopted and reinvented, out of love, not out of opportunism; or, yes, out of love and theft. His entitlement is his genius for making these musics his own; and his race has nothing to do with it. Origin has nothing to do with it; destination does.